You have now met the basics of Calculus and you have seen that mathematical modeling involves (i) formulating and (ii) solving equations.

with a≠0 and b and c given numbers, with solution

To compute the solution of

). To solve for x, the equation is divided by a to give

to both sides (and moving c to the right hand side). This is referred to as “completing the square” on the left hand side, since

With this clever operation, the equation takes the form

from which follows that

which gives the solution formula (2).

In traditional school mathematics students are supposed to solve a large number of equations of the form (1) and (3) by using the analytical solution formulas (2) and (4). The objective of this activity, which fills a large part of the schedule, is to demonstate to students that analytical mathematics is powerful and can be used to solve many equations.

The trouble with this approach is that it does no longer work: Many students find it difficult to formulate linear or quadratic algebraic equations from some given information, and tend to mix up the solution formulas and don’t see the beauty of “completing the square”. On top of that there is a growing insight that analytical solution formulas are non-existing for more general problems: Already a 3rd order equation is tricky and a 5th order impossible to solve by taking roots (as shown by Galois) shortly before his tragic death in a silly duel in 1832 at the age of 20).

On the other hand we have seen that just about any equation is solvable computationally, by Newton’s method for algebraic equations, and time stepping for differential equations. The analytical solution formula (3) for a quadratic equation in fact involves a root, which will have to be computed somehow anyway, and thus instead of memorizing the formula with its trick of “completing the square”, we may as well apply Newton’s method to the original form of the equation and forget the trick.In computational mathematics we can use  methods with general applicability, while in analytical mathematics we are restricted to tricks for a few very special cases. We understand that there is a big difference between a general method and a bag of tricks, and that this difference requires a reformation of mathematics education.. 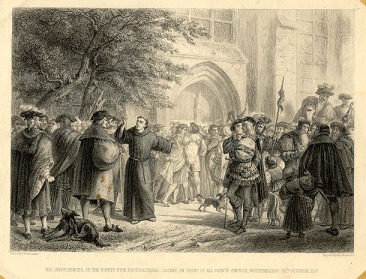 Martin Luther posting his 95 Theses in Wittenberg in 1517 sparking the Protestant Reformation: Who love not wine, women and song, remains a fool his whole life long… If you are not allowed to laugh in heaven, I don’t want to go there.

How to Learn and Use Calculus

You have now been exposed to the basics of Calculus, the wonderful invention by Leibniz and Newton, and you have gathered some experience. You have seen that Calculus concerns

All of this can be captured in a set of formulas. You find in mathematics teaching and learningdifferent attitudes to these formulas:

Case 1 is very common in traditional mathematics focussed on problem solving, which is evidenced by large collections of similar problems to be solved, one after the other. There are endless variations of proportionality leading to the simple equation

With this approach you are able to solve e.g. an algebraic equation of any order by Newton’s method, by using your computer.

The advantage of 2 is that you can use mathematics for a much richer variety of problems, by letting the computer do computational work: