What and Why in Education?

What is education good for? What are you supposed to get out from your university studies? Is it

Liberal arts education has its roots in the Greek paideia as an education for free citizens to developethics and logics insights to become a good human being and member of society, with emphasis on skill of rethoricsin political discussion and argumentation towards good goals. In the same way as physical training can make your Body more able, studies in philosophy were believed to strengthen the abilities and moral of your Soul.

With his two years younger brother Alexander, Wilhelm von Humboldt (1767-1835) belonged to a generation which witnessed the collapse of absolute monarchies in the wake of the French Revolution preparing the construction of a new Europe and Prussian State. The two brothers were both educated in the spirit of Rousseau and of the philanthropic school; in their youth, they adopted the ideas of the enlightenment, lived through the Sturm und Drang period and went on to join the Weimar circle of poets where they enjoyed the friendship of Schiller and Goethe. While Alexander travelled the world and guided natural science into new paths, Wilhelm paved the way for the development of the modern moral sciences.

Wilhelm lay the foundations of a new education system in Prussia leading into the liberal arts education of the 20th century. In his Theory of Human Education from 1793, Wilhelm states:

The paidei and philosophy of liberal arts education is largely missing in science/technology/economicsof today, but Wilhelm’s ideas on a modern educational theory have been attracting increasing attention in recentyears and may meet a renaissance in our new information age.

Compare with Measuring the World about to giants in mathematics/science Carl Friedrich Gauss and Alexander von Humboldt: 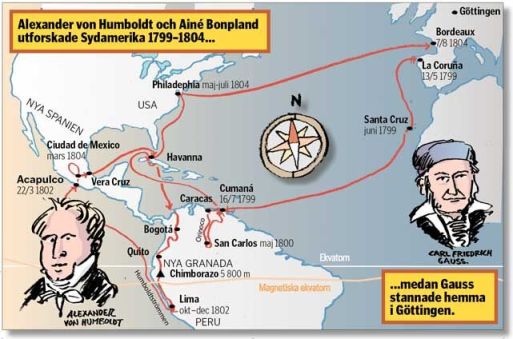 The travels by Alexander von Humboldt